Intelligence for your audio & video.™ 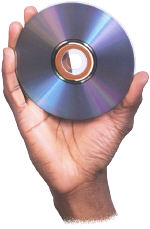 [Due to evolving consumer trends, the CD-DA feature found in earlier releases of OtsAV has been deprecated as of version 1.90]

Audio CDs have served us well for over 20 years. With the move to digital and computerized solutions moving full-steam ahead, is the humble CD doomed? Not so fast!

Sure, the majority of computerized DJs, are certainly going to want the convenience of having most of their collection instantly available at the fingertips. That is why digitally compressed audio files, such as MP3s, are so brilliant.

However, there will always be times when someone comes up to you at a party with a request to play a track from their favourite CD, one which you don't happen to have! Or, perhaps you haven't had time to rip and encode those new CDs you just bought on Thursday!

Why shouldn't you be able to play them anyway? Well with OtsAV, you can! Not only can you play them, but you can play them as if they were a normal OtsAV digital audio file! This means that CD tracks will appear in the normal OtsAV decks, you'll be able to adjust their pitch and tempo, etc, and they will go via the famous OtsAV dynamics processor!

That's not all -- they will even mix perfectly, using the same mixing technology OtsAV uses with digital audio files! That's right, play your CDs with no gaps between the songs!

Get this: You can even play or mix between multiple tracks from the same CD at the same time!

"I LOVE! the ability to play 2 cd tracks at once!! That is really cool."

This is all made possible by a technology we call CD-DA Direct. Think of OtsAV as an advanced CD player. It doesn't play your audio CDs via the analog means that normal PC CD players use. It plays them digitally! It is like ripping a CD in realtime!

And if you happen to be a person who has no desire to ever rip and encode your CDs as digital audio files, then you can simply use OtsAV directly with CDs. It really makes hardware units such as the DN-2500 begin to look a little obsolete! Try mixing between two tracks from the one CD with one of them!